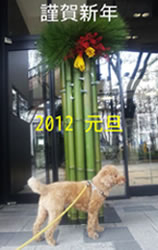 About 2 years ago, our now 5 year old poodle Koro developed red rashes on his stomach and around his ears. Everyone had a theory as to why--at first we thought he had an allergic reaction to the grasses he encountered on our nature walks; the vet decided that he was allergic to chicken; friends said it was because he had gotten wet and hadn't been properly dried. And others said that it was an obsessive tic which caused him to excessively lick and scratch himself. Too many potential reasons! So we turned to the internet. Again, a lot of information and possible solutions but what made sense to us was that dogs are basically meat eaters and didn't need the grains that are used as fillers in their manufactured dog foods to survive. Koro started to eat a grain free diet, including K9 Natural and has not had a problem since. An added bonus: while he has never been a fussy eater, Koro loves K9 (I'm telling you--the Lamb Feast smells yummy!). Today he's a happy and healthy dog which makes us happy, too!